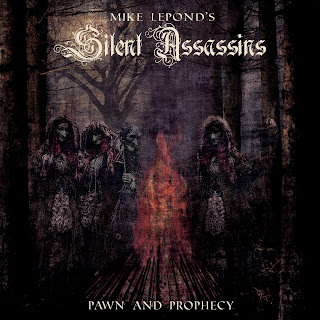 A beast of an album!!!
-NOTREBLE.COM-
"Pawn and Prophecy" manages to roll the group's blasting modern take on 80's heavy metal around with niblets of folk, blazing power metal, a classical piano solo, ample guest vocal spots, and even a freaking big band swing section.
-ANGRY METAL GUY-
This high octane blast of classic metal provides exactly the kind of punch you'd expect from a band of this pedigree.
-WORSHIP METAL-
A multi-faceted ensemble of talented musicians who bring forth a vast allotment of raw, in-your-face music, stretching out the boundaries between 1980's style Rock, Progressive Metal, and Viking/Folk Metal.
-CRYPTIC ROCK-

Frontiers Music Srl has released the new album from Mike Lepond's Silent Assassins, "Pawn and Prophecy"!  Lepond is extremely excited for the release of his band's sophomore effort. He describes it as "a collection of epic tales told with the power of heavy metal music. The classic head-banging riffs and kick ass vocals will get your horns and fists in the air. It is an album made FOR metalheads, BY metalheads."
Order and Stream "Pawn and Prophecy" here: http://radi.al/PawnAndProphecy
Best known as the bassist for progressive metal giants Symphony X, Mike LePond stepped out on his own to front his own project, Mike LePond's Silent Assassins in 2014. The band has returned with their sophomore effort, "Pawn And Prophecy" showcasing an onslaught of true heavy metal in it's purest form. A full hour of headbanding riffs, kick ass vocals, and lyrics telling epic tales drawing influences from the classic metal bands of the '80s to the Viking/Folk metal of today. As an example of the range of metal styles here, the title track is a 21-minute opus based on William Shakespeare's "Macbeth", where Mike and company have essentially written a heavy metal soundtrack to this classic tale and features guest appearances from Symphony X bandmates Michael Romeo and Michael Pinella.