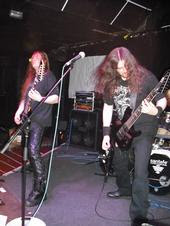 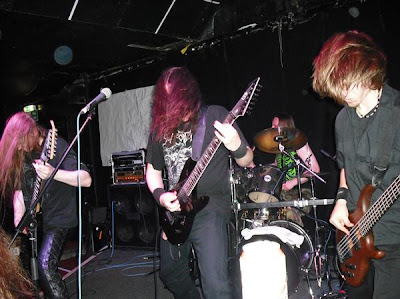 Diamanthian (U.K.)
The previous issue of Metal Bulletin zine observed:
--
Diamanthian (U.K.): Arcana Doctrina (Ossuary Industries)
There is an outlook on metal upon which the work of Diamanthian is constructed, and it is inextricably bound to a foundational moment. It is, if you will, orthodox or a single-purpose perspective on which their music depends: to bring under their praxis leaden heaviness of crushing riffs, regardless of the particular speeds utilized in a specific song.
Early 90s U.S. death metal, in particular New York and Florida—that heavy/thick/engulfing/downtuned guitar sound/riffs; blasting, practiced to a good extent in the Mike Smith school of the blast: heavy, strong pounding accentuated by a strictness of rhythm; very guttural low vocals as expected for this music; death and doom-death heaviness of guitar sound and slower moments in some songs, such as in “Immaculate Decay,” “Curse of the Nephilim,” etc.; or the gigantic “Catastrophic Divine Judgement,” for example.
Through the guitar solos, a variety of moods and solid songs, Diamanthian is doing right by death metal and its audience, which with this should be pretty pleased. Try listening to this and see how long you can go without growling along! Not very.

--
Scott Linton (vocals and guitar) explains their mortal way of live.
--
Congratulations on Arcana Doctrina! I think your dedication to serious metal music is evident, with the blasting and heavy sounds of Diamanthian. What are you plotting for this year?
We are very busy at the moment organising shows to promote Arcana Doctrina. We will be touring Scandinavia in May, and a whole host of gigs in the UK. Later on in the year we hope to do our first tour of the USA.

Is it correct that Scott Linton is the one writing the songs and the one whose life is centered on all the details related to keeping Diamanthian going?
I formed the band with our ex-drummer Pete Watson after our previous band DESOLATE SILENCE disbanded. Early on I wrote 90% of the music, but the latest album is much more of a group effort. I still write the bulk of the riffs, but there was much more input from the other members this time round. Regarding my life being centered around the band, does being fired twice from your job in the name of the band count?!

How have the songs for this album functioned in the live environment? What is the case, for example, for the monster that is “Catastrophic Divine Judgement’?
We have been playing all of the songs live and the response has been killer. All the people who were corrupted by the first album seem to be really into the new tracks. There are a surprising amount of masochists involved in the underground scene. Our live shows seem to bring them out, and being sadists, we are pleased to maim and abuse them.

Also, who plays those nice solos on the album? And live? Are Andy Campbell (drums) and Matt Campbell (bass) brothers? Is Matt is a session bassist or a full member?
Troy plays all the leads. I play all rhythm parts and vox. Exactly the same as 'The Infinite Descent'. Andy and Matt are not brothers, they just happen to share the same surname. Matt has fitted into the band really well. He has a great deal of musical knowledge which he applies to all the bass lines. As far as the live environment, you would have to be the judge of that, though we have been firing on all cylinders of late.

Diamanthian’s lyrics on “Arcana Doctrina” reflect skepticism about the uses of religion. For you, who writes the lyrics, how does the general situation (economic, social, political, as well as the general state of music as a cutthroat business, greed, etc.) in your life keep you motivated, frustrated, angry for you to channel all of those energies into concepts for lyrics? And are your lyrics are collaboration or the work of an individual?
All the lyrics are written by myself. The actual lyrics/concepts were dealt with a great deal of consideration and respect. I did not want to write any childish nonsense as I have always thought that juvenile lyrics totally belittle anything the music has to say. Regarding your comment about the lyrics on the album reflecting skepticism about the uses of religion, this is not the case. For example 'Christ Dementia' deals the worldwide phenomena of people thinking they are Jesus Christ incarnate, who then go on to kill people as an act of righteous faith??! A track like 'Transfiguration' hypothetically turns the whole resurrection concept on its head.

You have toured Scotland. How are things there for you?
We have toured Scotland 4-5 times and we always enjoy going up there. Total alcolunatic locals. There are a great deal of Death Metal veterans up there who understand where we are coming from so it is always an honour to be asked to return. I'm half-Scottish myself, and both the Campbell's in the band have their clan ancestry so there is definitely something in the blood as to why they relate to us.

Where is your hometown in the U.K. and how is the metal scene there? How was it back then in 2000? Are there now more bands in your town, city or region that you personally like?
We all live in different towns to each other but the band has always been based in Liverpool. Turnouts round here are usually around the 100-150 mark and every Liverpool gig is a blast as we know most of the audience who have been with us for many years. We don't know The Beatles but we do know Carcass. Jeff Walker designed our logo as you might already know. The only other Death Metal band in Liverpool worth mentioning is Neuroma who play Technical Brutal Metal in the US vain.

“Defiling the Eucharist” certainly is a heavy song. How do you get that heaviness?! What is driving those sounds of doom that Diamanthian so effectively uses?!
You should hear it live - your sperm count will go through the roof! That is one of my favourites off the album. The intro riff is quite old, '03-'04 maybe, and we couldn't fit it into any of the older tracks so it was left out. We resurrected it for this track and I'm glad we did. The whole Doom section was written one night on my friends ancient acoustic guitar that just has this fantastic, rich, resonant tone to it. I transposed it to the electric and before we new it we had the skeleton of 'Defiling the Eucharist'. Its interesting how most of our heaviest material is written in the early hours of the morning.

What is the story behind your song “Bound by the Chains of Purgatory”? What are the circumstances for that song?
This track deals with a complete and utter spiritual stagnation. Condemned to life after life as punishment. There are those who believe that after several incarnations on earth, the soul has experienced what it needs to then move on to a further level/dimension. You can apply this to most religions, and also, in some ways to the agnostic way of thinking in that there is the possibility of there being more than one corporeal existence without the acknowledgment of a single all powerful deity. 'Bound by the chains of Purgatory' is about a soul that is condemned to incarnate again, and again, without the possibility of 'moving on' so to speak, as told in the line "trapped in a cycle of incarnation, to endure this corporeal curse".

When will you play Houston, Texas? Two metal radio shows in Houston, “Ejacula” and “From the Depths” have been playing Diamanthian.
We will be coming over to Texas toward the end of the year. Nothing has been finalised yet, but the grave is being dug as we speak. Houston will be a priority I assure you.
In closing, I would to thank you on behalf of the band for contacting us. We really appreciate your support.
I wish yourself and the fanzine the best of luck.
All the best,
Scott Linton THE END.
Posted by Metal Bulletin Zine at 6:26 AM