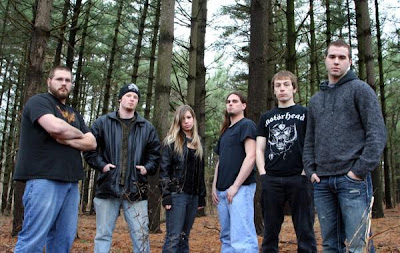 Until Extinction (Missouri, U.S.): Lament
After a short keyboard/atmosphere/gothic intro, “Putrefaction” rolls into town and in those five minutes and 24 seconds this band displays all their wares and wherewithal: speedy gothic black metal riffing/drumming, keyboards; slow brief moments with very low, guttural growling, then picking up the speed to a more black/death tempo with a few different types of growling. Then about the two-minute mark the angry/yelled/core vocals come in and the midpace sets in; now, more keyboards, at the three-minute mark, melodic guitar soloing and background keyboards; closer to the four-minute mark, come in the high, soprano-style vocals; as the five-minute mark nears the speed picks up to the blasting level and here it sounds like “symphonic black metal.”
That’s just in one song. Can you say, “bragging”?!
Some don’t like bands that move from style to style that way, within a song. Others do like bands like this one because they don’t want every song to be similar.
Now, Until Extinction does not mix as many styles as the above song in every track. Most songs have a combination of two or three styles, not seven or nine.
However, there are certain sounds that anchor the band’s perspective: one is the melodic/thrashy guitar riffing (in the Gothenburg style); another element is the gothic/atmospheric/melancholic/keyboard and the combination of growling and high vocals; in addition, the angry/yell/core vocals are pretty dominant. For example, the very low, guttural, incomprehensible vocals are used sparingly.
The sound quality is good, overall, and sounds pretty professional. One would think the band should be content with this recording, as it shows their abilities. Guess this is a self-release, but the sound quality is good, not garage-like. For those into bands exploring different styles.
www.myspace.com/untilextinction
Posted by Metal Bulletin Zine at 10:08 PM