Ravenclaw (Slovakia): Welcome to the Ravenland 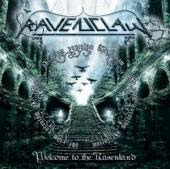 Ravenclaw (Slovakia): Welcome to the Ravenland
Ravenclaw is a classy, elegant even, heavy/power metal band with lots of neoclassical guitar work, and melodic, high traditional metal singing.
For those into high singing and who want to hear a band who have trained in the art of melodic metal, with some songs that are uptempo, midtempo, ballads, etc. The vocals are melodic, not sounding angry, aggressive or violent. Actually, this style has a kinship with André Matos’ vocal personality or HammerFall. Those are just two examples of the singing references, not an overall sound/musical similarity.
Examples of the Ravenclaw sounds:
Track five: “Dragon’s River” (3:33): This is a piano-and-vocals ballad about waters, mental peace, etc. Definitely for those into piano ballads.
Track number six: “Patron Saint” (3:15): After such a ballad, it’s only expected that these leather-jacket-wearers step up the energy to uptempo heavy metal thunder style. And that’s what they do. Imagine, basically, the opposite of the ballad they just played before.
Number 11, “Don’t Be My Enemy” (3:37): This song has a “medieval”/folky melody; another ballad for friendship and big hugs all around.

Some of the other songs give a further framework from which to approach Ravenclaw: “Brother Sun” is a sort of folky heavy metal midtempo track; “Light from You” is a catchy, very melodic heavy metal song, midpaced, and made for sing-alongs. “Power Slaves” is one of the heavier songs, with a bit more crunch and double-bass drumming and very high, air raid siren vocals, and keyboards. “Into the Night” also has a substantial crunch going on and a very melodic chorus.
Understand?
www.myspace.com/ravenclawmetalband
Posted by Metal Bulletin Zine at 10:11 PM