Of Raven and Ruins (Texas, U.S.): Bound to Prophecy 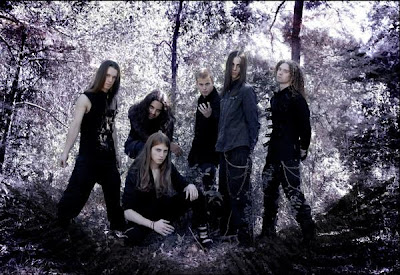 Of Raven and Ruins (Texas, U.S.): Bound to ProphecyOf Raven and Ruins is clear, crisp guitar melodies, often with a neoclassical feel. They apply the same approach to the prevalent use of keyboards. In addition, they use growling with the melo-thrashy guitar work. The result is something like a meeting point of Gothenburg and symphonic/neoclassical, with a few hints of other little things, such as gothic and melancholic sounds, for example.
What they have in mind is making songs that are catchy.
Sometimes it’s a thrashier moment combined with a bit more uptempo pace; or, mellower midpace with a more symphonic feel. The vocals are growled. “Atrophy of the Unavailing” has guttural and some higher, shriek vocals, within a speedy/uptempo melo-thrash main rhythm; some tremolo riffs are used; guitar harmonies, too; the keyboards while present, play only a supporting role.
“Dance of Disdain” is midpaced, tremolo-riffs/melo-thrash riffs with more upfront symphonic keyboards.
While different in some ways, both songs are good examples of the main aesthetics at work here for this album, not just these songs.
This band is aiming for a polished clean production, and even though this is a self-release, it’s not a recording with demo sound, but a rather good quality recording. They probably want a big, bombastic sound, but on here they kind of already are in that territory, even if they don’t have the big budget yet. www.myspace.com/ofravenandruins
Posted by Metal Bulletin Zine at 10:05 PM

Labels: Of Raven and Ruins (Texas, U.S.): Bound to Prophecy