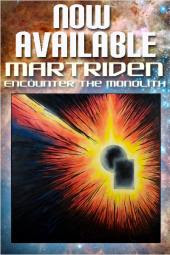 Martriden (Montana, U.S.): Encounter the Monolith
Forty-five minutes of tripping metal. A big part of the sound is inspired by black metal and prog, and a penchant for long songs and exploration. These six songs in general have smooth transitions from faster parts, to proggy parts and the mellower/space metal elements.
This music requires patience and repeated listens: “Heywood R. Floyd” (8:42) makes it difficult to remember all the parts, since the mental traveling within the song is too much to understand in one listen. Definitely for the studious.
Who writes this music? Is it total metal nerds weeding out those with short attention spans or the simple-minded? Is it absent-minded musicians who pay no attention to time?
Who knows, but at least the following is clear: there are long segments without vocals; lots of proggy moments and black metal shriek style vocals.
“Death and Configuration” is more than ten minutes of mellow guitar work, keyboard/space moments, proggy segments, etc. It’s an instrumental song in which the band enjoy the twists and turns they have created for themselves.
But this band does have some easier songs. The title song (6:32) is a bit more straightforward, sort of “black metal/prog,” for this band. And actually, “Human Error?” (4:32) is an even more “normal” song with those shriek-growl vocals and proggy heavy parts. There are keyboards in the background of this song, for that big landscape feel. The band themselves likes to use astronomy pictures and images, which to them, we guess, is how they hear their own music: in terms of other worlds and other ways to write songs.
Listeners into long songs, proggy bands with a metal edge should have in this band a serious adventure that they need to investigate. If you like bands that think big-idea music. Good sound quality, too.
www.myspace.com/martriden


Ana Kefr (U.S.): Volume 1 (Dinky)
Ana Kefr goes for an eclectic, contemporary, hard/chuggy sound with chugga/breakdown/mosh guitar for the angry/growl/“brutal” and screamo sections; they have clean vocals, of the current rock/core sound; for melody they utilize some of those twin-guitar harmonies or melodic sounds. As if that weren’t enough, they also have keyboardy moments, like interludes, for mood.
Ana Kefr could also be described a salad mix of current rock sounds: they vary within each song and throughout the album. The transitions between songs are not too smooth, but they seem to be working that abrupt feel to their advantage, making it their thing. From the chugging/breakdown “brutal” parts to the mellow interludes, it’s what they do. It could give you some pleasure or a headache, it depends on your taste or masochistic tendencies.
www.myspace.com/anakefr


Black Reign (Canada): Demo 2009; Demo 2007
The 2007 demo is pretty unintelligible. It sounds like a band recording something for themselves and their friends. It sounds like a thrash band doing their thing, but it’s difficult to hear what’s going.
The 2009 demo is a more growled, heavier, faster band. The sound quality is poor on these recordings.
Leave it at this: this is supposed to be fast and loud, energetic and “brutal.” However, what is not clear is how well these songs would sound with the correct sound quality. As it is, there is fast drumming, fast riffs, growling, shrieking: a band having fun attacking their instruments and probably annoying the neighbors.
www.myspace.com/blackreign6
Posted by Metal Bulletin Zine at 10:01 PM