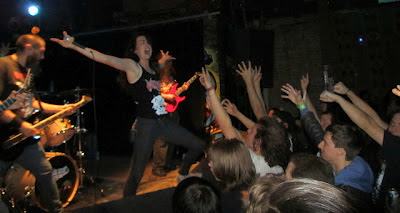 Landmine Marathon (U.S.)
“Gallows,” their fourth album, continues the mission:
Landmine Marathon plays death metal.
Not “technical funky free-form death metal,” not “melodic death metal with clean vocals and a bit of hip hop” and not “death metal with a country twist and pinch of swing.”
No. Just death metal.
This band probably loves Bolt Thrower and Dismember a lot, who knows.
Some 29 minutes of raging death metal growling and in-your-face riffing and drum attack: 8 songs in which Grace Perry growls and screams like crazy.
For some stupid reason, people keep complaining about things this band does not do. Somehow, some people have gotten it in their heads that they should give “advice” to the band: That they should be more melodic, that should not be so “noisy” or that they should include more “variety” into their music.
Well, go listen to bands that do then! What the hell is wrong with people?!
Landmine Marathon plays death metal.
Put this music on and bang your head and growl along or air-drum or air-guitar along. www.landminemarathon.com
---
Metal Bulletin zine inquired and Ryan Butler (guitars) responded.
--
Congratulations on such a rocking album!! I have been enjoying it. What have y’all been doing? touring, making videos, interviews, street fighting, meditation?!
Haha, thanks! Since the record came out, we did a US/Canadian tour with Warbringer, Lazarus A.D. and Diamond Plate. After the tour, we had to deal with the daunting task of finding a new drummer, as Andy left the band.
After a month or two of searching and auditions, we decided to work with Raul Varela (Impaled, Ghoul, Morbosidad, etc.) and we just played our first show with him Monday night! The show went very well and we are all really excited to be working with him.

What level of success does Landmine Marathon have at this point? Are you able to tour and come out of the tour NOT owing money ? You have been at it since 2004, correct?
Landmine has been a band since the tail end of 2004 and I joined in September of 2006. We're generally at a nice break even point and usually come out of a tour not owing too much money, which is awesome. We all find ways to pay our bills and spend a decent amount of time on the road.

I have noticed that some people keep complaining about how your band is not melodic or “catchy.” Do these people think that you are part of the same trend as Trivium, Bullet for My Valentine and those bands on that magazine Revolver? Is there a misunderstanding there?
I don't know. I see this stuff a lot and it makes me laugh. I think part of it may be that we tend to get a lot of mainstream press and that's what most the kids involved with those mags/blogs/messageboards are exposed to. I, however was raised on a steady diet of Crust/Death Metal/Punk and actual metal and Landmine sounds exactly how I want it to sound. On the other end, we get crusty kids often saying that we sound too clean and polished. Can't win either way.

Did you use to be a hardcore band or something?!! Maybe you have gone on tour with those bands that have those “I-just-got-out-bed” haircuts?!
Um, not that kind of hardcore. No. I spent a lot of time in Grind bands, hardcore bands, and DM bands etc. I've done time in the likes of Unruh, Wellington, North Side Kings, Structure of Lies etc. But, no, my hair has never had the "windswept" look. I'm influenced by Disrupt and Entombed, not Asking Alexandria and The Devil Wears Prada. In fact, there's not really much music in the last 15 years that has even had an influence on anything I write.

You show some different skills on the longer track “Knife from my Sleeve”! Death metal, plus some really heavy moments of “death doom,” then uptempo speeds, a really nice guitar solo, and blasting!! Is that guitar solo your tribute to Entombed’s doom/guitar solo moment in the song “Left Hand Path”?!
We always try and have some Bolt Thrower parts in there, as early on the band was heavily influenced by them. We've come a long way and gotten a little crustier, but we try and keep some of that majestic doom feel they're notorious for. “Left Hand Path” pretty much plays through my head continuously on a daily basis. Man, every interview seems to be about our influences lately! haha. At least you get it.

Are the drums that we hear the real drums that were recorded or are they “enhanced” or “replaced” with a computer program? Metal drums in the 80s and early 90s seem to sound better? Do you decide on your drum sound or someone else, like a producer?
Well, I've produced everything Landmine has ever done. “Wounded” [the 2006 debut] has no sound replacement whatsoever. Just some automation. The kicks on “Gallows” are sound replaced with samples of real drums, but there's not really any Beat Detective work. What he played is what he played. The snare has a sample of Andy's actual snare blended in with his snare mic, but the mic is there. It just helps keep the dynamics steady for blasts, etc. Works better than compression/automation and is sometimes a little quicker and less intrusive than doing full automation. We're not going fully raw, but do like to keep a nod to the old school with our production. There was a lot of sound replacement going on in the 80's that people don't realize.

On your songs, have you done any looping [cut and paste] of the guitars, or are you actually playing the guitars all the way through the songs? Does Grace actually do the chorus every time or is that looped to “save” time and money?
There's no guitar looping unless we had to fix a mistake that we missed. Grace pretty much sang everything, but there were some times where she couldn't sing anymore where we may have pasted a line from a chorus. She spends about three hours on each song. So, it's the real deal.

“Cloaked in Red” is an example of the different vocals that Landmine Marathon uses: a higher, semi-black metal scream (the beginning of the song); and a lower growl (starting at about the 1 minute mark). Is that all Grace? By the way, I like the drum roll that Andy does in this song. The guitar “solo” is really short. Why?
That's actually the only song we wrote before we wrote the record and it was written for a split that never happened. Supposed to just be a short crusty rager. We weren't going to put a solo originally and decided to later.

“Morbidity” closes the album with a midtempo and uptempo pace, with some (maybe?) Bolt Thrower-inspired hooks! I feel like on this song, the double bass sounds weaker, more in the background. Have you noticed this? At any rate, it’s good album closer, before I go back to “Three Snake Leaves” and start it up again!
Hmmm. Should be the same levels on every song! I'd have to open up the sessions and look! I may have automated it down a hair due to there being so much double bass, but I don't think I did. This song is on our list of ones to learn and try live.

Thanks for the interview!!! THE END.
Posted by Metal Bulletin Zine at 10:02 AM