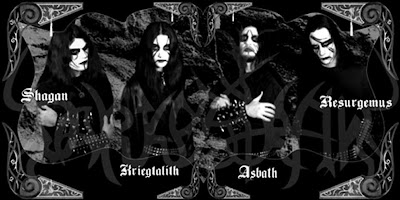 Darkestrah (Kyrgyzstan/Germany): Khagan (Osmose)
“Saga of Temudgin” (9:28): Raw, atmospheric, symphonic black metal with high shriek vocals and upfront keyboard landscapes rock out for several minutes. Then there’s a soft/mellow transition. Then symphonic black metal returns at an uptempo (not blasting) speed, that is, until the blasting shows up again. By now, it seems like the song has turned into a fast black metal semi-instrumental number, with a strong symphonic element. This song has some “clear” vocals, but it sounds like an evil monk chanting from the middle of the woods. Good stuff.
“Onon River” (2:58): A simple acoustic, instrumental piece for the total time of duration that is, more than anything, a transition to the next track.
“Khagan” (10:55): This has also several minutes of fast black metal and quiet/mellow transition to midtempo black metal. This type of song, of course, has several moods within it, from heavier, grim moments, to stretches of total speed, and other things in between.
Darkestrah requires patience for the changes in mood and speeds. Not for the casual listener of black metal, since, one would think, the demands of the music weed out those who want instant gratification. The dedicated listener will understand better after repeated listens. www.darkestrah.vze.com
www.myspace.com/officialdarkestrah
Posted by Metal Bulletin Zine at 10:58 PM