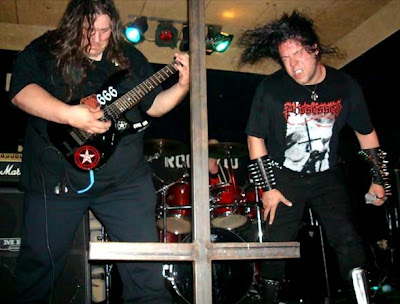 Blaspherian (U.S.): Infernal Warriors of Death (Deathgasm)
Just how much heaviness is possible in death metal is what Blaspherian want to find out.
These guitars are tuned to the “thunderstorm” setting, and if they were any heavier, this band might go ahead and bite the bullet and stop using guitars altogether, and just use nothing but bass guitars.
The guitars play one super-heavy-duty thick riff and squeeze everything they can from it.
The vocals are way, way beyond incomprehensible and I’m pretty sure the rest of the band has no idea what growler is saying…maybe he doesn’t know either…he’s just growling as low as it gets ... total death metal.
They have lyrics about being “Sworn to Death and Evil” and “Infernal Warriors of Death,” so the imagery is crafted to fit the massive downtuned chaos.
Of course, this band loves Bolt Thrower and Incantation…that’s the ticket right there.
Some people think death metal is a matter of life and death.
To Blaspherian death metal is more serious than that. www.myspace.com/blaspherian
Posted by Metal Bulletin Zine at 10:56 PM