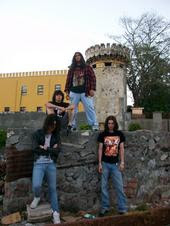 Conqueror (Costa Rica): In the Depth of Darkness
The constant-strong use of guitar solos, and the recurring additional rhythm riffs—on top of what already are fire thrash/black metal riffs—and the dedication to well-arranged, longer songs puts Conqueror in a pretty distinctive spot: they stand out based on their guitar work.
The fact that they use solos a lot throughout the songs shows that extra step, beyond saying, “that’s good enough” and going further, for better than “good.”
The riffs are based-inspired on that particular sound of raw thrash/black sound, using the 80s influence, but that’s not where the band stops. Those riffs are then spiced up with additional spiral/tremolo/black/thrash riffs that intensify the songs, and give them extra atmosphere, making them more sinister than just speed, and more interesting, too.
The band has a great attitude reflecting the classic sound that encompasses black/death/thrash, with vocals of the black/death raw, early music of foundational German/Brazilian/U.S. bands. Some listeners will hear this or that particular influence, depending on one’s own experiences and likes, but the most important thing will be to hear for yourself. Why not? It’s worth investigating.
www.myspace.com/conquerorcr


Janus (Italy): Vega
With music it is often the case, as with other things, that some people demand instant gratification. However, music under the system of greed-profit-thievery, capitalism, can often be and is merchandise, but music is also not exactly equivalent to hamburgers, shoes, toothpaste or telephones.
Janus (or: JANVS) in some ways swims against the stream. Overall, this music requires more patience, endurance and a willingness to see the different colors, shades and layers. The fast moments give way to uptempo ones, then to a midpace, then back to near-blasting speed, and returning to a slow moment, then an extended guitar interlude or a melodic or spacey segment. The guitar work is creative, sometimes melodic, sometimes very tremolo-ish or spiral, etc.
There are obvious black metal undertones to this album and this music cannot but originate from black metal starting points. Things are not so simple, though. Certainly not black metal in the strict sense, but that’s exactly the point: to take those structures into a long-winded, instrument-centered, prog framework.
The result is something flexible-ambiguous, where speed, guitar solos, melancholy, growling, clean singing, long songs (around the 7-minute mark as an average of sorts) all take different shapes.
Imagination + ability + songs = Janus.
www.myspace.com/janvsdotit
Posted by Metal Bulletin Zine at 2:46 PM