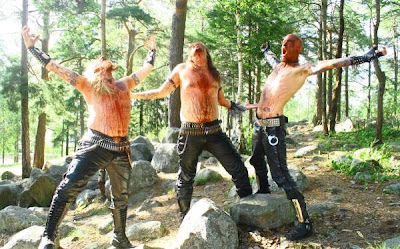 Wan (Sweden)
Their album Wolves of the North is black metal allegiance: vocals entrenched in grimness, razor guitar tone and austerity of sound.
It’s red corpsepaint, spikes, bulletbelts, tattooes and winter obsessions. And lots of wolves.
Wan’s is no acolyte praxis, either. In more than 35 minutes of music, the album blasts the tank division black metal frequently, so there’s plenty of speed; there are variations within the overall structures, some midpaced moments where riffs go for more than speed, such as mood, a certain feel, giving the song (and listener) some room to absorb; there are some moments of memorability, as opposed to sounding like one big blur.
The wolves of the north are: Aganaroth (guitars), Isengrim (bass), and Tsjud (vocals), who answers the questions here.
www.myspace.com/theunloywan

----
Hello, what is going on with Wolves of the North?
Hello! Well, our album was released a couple months ago so we’re doing our best to promote it in every possible way. We hope and believe that black metalers all over the world will enjoy our filthy tunes.

Do you all three live in Eskilstuna? Is there a scene?
Only Isengrim lives in Eskilstuna now. However, we’ve all lived there once upon a time and I will most likely return soon. The city is rather dead when it comes to live possibilities and radio time and such things. But the scene is quite big anyway. We hang out with a bunch of friends that are involved in bands such as Tyrant, The Black, Arcana, Shining, Crypt of Kerberos, and more...

Aganaroth, are you the only person who plays guitar in Wan?
Well, I’ll have to speak on behalf of Aganaroth here. He’s the only one who plays guitar in Wan. We want to keep all things old school and therefore we reject the thought of twin guitars. We all go way back as friends and band mates. In Wan it’s Aganaroth and Isengrim who compose all the music. Personally I just contribute with suggestions, ideas and smart remarks.
Aganaroth have earlier been involved in Exanthema, Tears of Grief and today also have Inside Scars, Sapfhier and Angellust besides Wan. Isengrim have been involved in Exanthema, Tears of Grief, Atra Filia and today have Misery MMIX, Fornborg and The True Badours besides Wan. I have been in Ara Sepulcri, Satans Penguins, Atra Filia and today have The True Badours on the side. I also write lyrics for the last one mentioned, Fornborg, Inside Scars and guest lyrics for some other bands every now and then.

Do you remember how the music for “Rise of the Antichrist” was written? What is the story behind “13 Sons of the Devil”? And “Wargoat”?! !
Musically all songs on the album were spontaneously written and composed as we recorded the shit in the studio. "13 sons of the Devil" was originally called just "Sons of the Devil" but since it actually was the 13th song we made Aganaroth suggested we’d change the title. "Wargoat" is simply a song of praise to Baphomet.

Are lyrics written before the music?! Do you drink when you write?
I write all the lyrics and they are all written before the music is made. At very few occasions there will be a minor change to make the words fit to the music. But generally Aganaroth and Isengrim manage to create riffs that just fit my words like a condom! I write lyrics whenever the inspiration strikes and the words starts bubbling in my head. This can be on the subway, in the sofa, in the forest, at work, on the crapper or basically anywhere. I never write when I drink. That always ends up with some really shitty words. Besides, when I drink I like to enjoy it with friends.

You have lyrics in Swedish and English. Can you say what the following song titles mean? “Med Stormsteg Mot Döden,” “Hädanfärd,” and “Ulvhäll”? Is aggression and antireligion the main feelings? Do your lyrics avoid political positions?I
You’re quite right. The overall expression in our music and lyrics is about aggression, hate, antichristianity and death. I fucking detest politics as well as every politician so that´s a subject that never will be brought into Wan. "Med stormsteg mot döden" means ‘by leaps and bounds towards death’ and of course it’s the christians I’m singing about. "Hädanfärd" means ‘passing/demise’ and "Ulvhäll" is more or less impossible to translate so I just say that it includes wolves. Some other of our swedish titles translates into ‘dead christian man’ and ‘cravings of the rage’.

Did you use a drum machine? A
Yes, we used drum machine on the album. Every living bastard have an opinion about that, and so do we, so keep your opinion to yourselves and fuck off!! We use it for the convenience since we don’t have a breathing drummer. Of course, this is not our optimal choice and on our next release I assure you all that it will be real drums recorded. Our old (very old! haha..) friend Immansuetus (previously in Loss, Mental Crypt, Xul) is intended for the job. And we actually recorded a Shining cover recently, on which we recorded live drums. This masterpiece will appear on a future Shining tribute album that will be released by Avantgarde Music.

For the record, what does WAN mean? What is Abyss Records?
I’m surprised that so much people ask what our band name means? It’s just a regular word in the English language and it means pale/gloomy, which fits perfectly to our concept, our minds and our appearance. Abyss Records is an American label located in Indianapolis and the label have been around for quite a few years and possesses a handful of hard releases from great bands.

Do you go to the Vilsta naturreservat? What is it like in the winter?
How do you know about Vilsta?? In fact, a young woman was murdered there not long ago. Regardless it’s a nice forest area and we go out there occasionally and make a camp fire, drink beer and enjoy ourselves in the darkened landscapes.

Stay in contact!
Thanks a lot for giving a fuck about Wan! I suggest that whoever read this go buy our album and get their minds raped by our devastating old school metal! Cheers!! THE END.
Posted by Metal Bulletin Zine at 12:34 AM