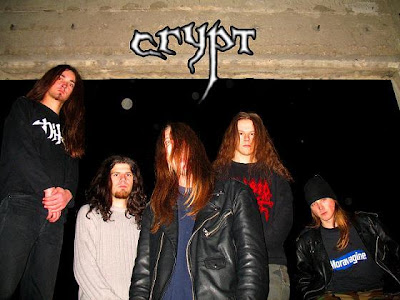 Crypt (Bosnia and Herzegovina): Controlling the Madness
1. “Fresh Cadaverous Flesh” (4:23): This demo is low-guttural death: basic and cozy, jackhammer-drumming-driven growl music. With this band, the drummer sounds like the heartmachine of the band: such dominant drumming just anchors the whole proceedings. There certainly is a Mike Smith school of drumming going on. Not too shabby, Crypt!
2. “Maggots” (5:09): this song’s lyrics are actually not jackass gore-zombie lyrics, but about mental domination. With a title like that it’s easy to observe, “Not another band with the lyrics about zombies, worms and excrement.” But it’s not. However, it is true that the other lyrics are still very much into the gore, but maybe in the future they can find a way out of this cliché, as they did with this song.
3. “Throne of Insanity” (5:09): Crypt flexes their fast, blasting and uptempo, and occasionally midpaced, musical muscles to get what they want by way of a “brutal death metal” sound. There are a couple of brief guitar solos, and this track goes straight for a pounding-drum attitude.
4. “Tomb of Abomination” (5:56): They use a little of that groove/mosh/crunch. Sure, the band is still honing their sound.
It’s a demo with easy-to-enjoy songs by a band clearly developing their sound. Crypt is very a meat-and-potatoes death metal band and they are not pretending something else besides loud, blasting, growling music for the moshing crazies. It is “sick death metal” that motivates them.
www.myspace.com/cryptold
Posted by Metal Bulletin Zine at 10:42 PM