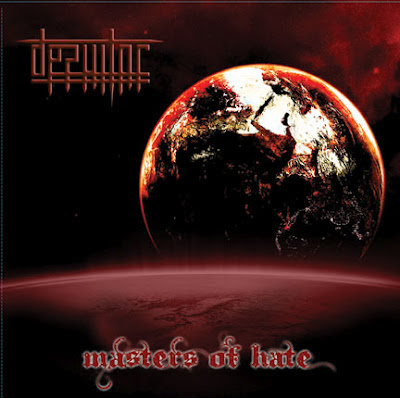 Deadborn (Germany): Mayhem Maniac Machine (Apostasy)
Deadborn relies on speed—fast riffs and fast drumming—to get their point across: loud and fast death metal.
Deadborn’s reliance on speed, of course, will be perfect for those that prefer no-nonsense death metal. If you want your music not messing around, then Deadborn knows your name. The songs are between 2 and 5 minutes, on average: very little fat, all muscle.


As such, for this very reason, Deadborn is quick to get the job done and be gone. Once the cd stops, the speed and fury will remain in your head, for sure.
Where Deadborn will need to improve is the guitar work. The blasting tends to obscure the fact that the guitar work, while competent, could use more outstanding riffs. For that reason, Deadborn will rock you, but they will not yet really make its presence felt once the music stops, besides the speed.
Most of all, Deadborn sound eager to get in front a group of human beings that want to hear some loud music! They believe in not wasting people’s time with wankery, bass and keyboard solos and long songs. So, in that sense, this is from the Motorhead-Tankard-Overkill-Destruction-Cannibal Corpse school of metal: the goal is to thrash the audience, nothing super complex nor dazzling, just a lot intensity. Deadborn’s music is closer to blasting death metal than any other category, so the energy level is high throughout. www.myspace.com/deadborn666 www.myspace.com/deadborn666
Desultor (Sweden): Masters of Hate (Abyss Records) I was listening to the second song called “Another World” and I thought, “Nevermore with blastbeats.”
Of course, that’s totally not true. Maybe “extreme metal with traditional/high vocals” would be more accurate. After all, Nevermore’s guitar work doesn’t really sound this thrashy and the drumming is not this fast, so and so forth.
Desultor, as a musical idea, probably sounds strange to some people: Thrashy/speedy guitar work, with some definite death metal leanings (so, basically, heavy stuff); fast/blasting drum work, but with clean vocals.
Really, clean vocals? Can that work? Well, it’s certainly different from the speed combined with some talentless jerk “vocalist”, just hollering and screaming.
So, on this album, with all the speed and thrashiness and death metal speed, at no time is there some talentless hack cupping the microphone and eating it like a turkey sandwich and just burping into the mic and claiming he is doing “vocals”??
No!! There is not!! There is no one barking like a dog on this album, and no one growling about zombies and horror movies. Oh, yup, I almost forgot to mention the songs. Yes, Desultor keeps it fast, blasting, thrashy/deathy and it is easy remember it all because of the clean vocals.
“Nevermore” with blasting speed is not the best description, but if you are curious, that should at least sound like a proposition to look into.
Yes, I know, this doesn’t actually sound like Nevermore. That’s because this is not Nevermore. This is Desultor. A different band. See how that works? www.myspace.com/desultorsweden www.myspace.com/desultorsweden
Posted by Metal Bulletin Zine at 10:51 PM