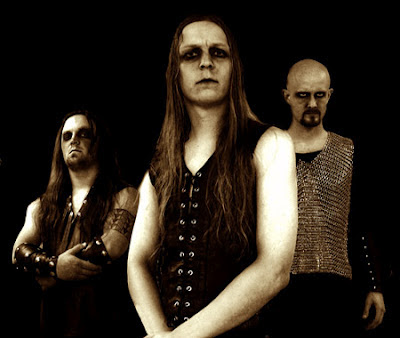 Einherjer (Norway): Norrøn (Indie Recordings)
The first song, “Norrøn Kraft”, is some 13 minutes long and it is Einherjer’s way of announcing their return to action in the studio since 2003’s “Blot.” Einherjer is harsh black metal vocals, but with big, easy-to-get-into rhythms and riffs. The song is a midtempo song that explores progressive metal moments and different moods.
This song is also good for finding out who has the patience and endurance to stay around and get all they can from the music. The track is very gratifying and fun, you just have to give it the room necessary to breathe.

Songs like “Naglfar” (5:11) and “Varden Brenne” (6:21) display that Einherjer-ish midpaced, sing-along melodic sensibility. This band utilizes gang-shouted backing vocals a lot. Those vocals may be humming or pirates-on-a-ship group vocals or the collective shouting of particular phrases.
There is also show a rock and roll simplicity of the guitar solos that focus on melody, not technicality.
FYI, the song “Alu Alu Laukar” (2:51) is a super, super ridiculously catchy song. Great for singing along. The song is a cover by Norwegian band Ym:Stammen.
To the point. The album is wonderfully coherent mix of several styles, Einherjer’s “Viking metal” awaits the more adventures listeners. www.einherjer.com
Posted by Metal Bulletin Zine at 10:52 PM