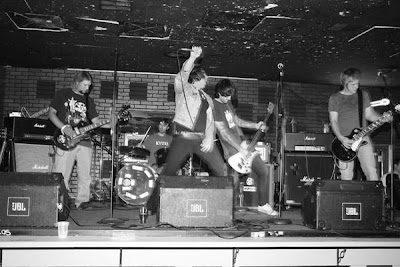 Züül (Illinois, U.S.): Out of Time (Planet Metal)
Züül plays uptempo, rocking, gritty street heavy metal.
It appears that this band has a bit of an unusual attitude about their traditional, no-nonsense rocking music:
1. Unlike the vast majority of heavy metal bands, Züül has opted to do no midtempo or slow songs, nor anything like a ballad, certainly no “power ballads.” It’s all uptempo all the time.
2. Then there is the fact that the band sounds like nothing that this zine has heard this year. They seem oblivious to pleasing any expectations of sounding “contemporary” or “keeping up with the times.” There is no thrash, growling, blastbeats, nor any emo, core, breakdowns; no keyboards or no “brutality,” nor anything like that.

Of the nine songs, try the first song “Out of Time,” or the last one “Return to Yagi” or the middle track “Warhammer,” or the second one “Warriors” or the penultimate track “Ride Ride” or the antepenultimate song “Darkness on the Ice”—it’s all rocking heavy metal, no midtempo and no ballads.
How’s that for a concept?

The sound shows no attempts to be supermelodic with keyboards or ear-candy sounds, no fancy-slick studio trickery, no funny-effects: it’s just human beings plugging in their instruments and rocking.
The vocals are not air raid siren, but a midrange tone that does not steal the thunder of the other instruments, but rather fits in. That’s a bit different, too.
By the way, this is no demo-sounding stuff, either. It’s a good, solid-sound full album.
Someone in this band likes the second wave of heavy metal of the late 70s-early 80s?!
www.myspace.com/zuulcontact
Posted by Metal Bulletin Zine at 1:34 PM