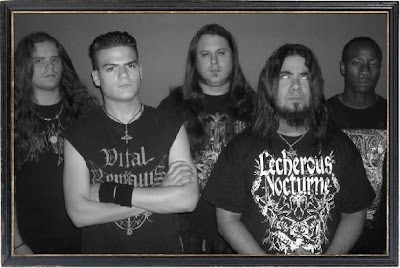 Venomous Supremacy (Texas, U.S.)
In 2010 in Houston, Texas, Venomous Supremacy brings their metal for people to mosh and goat-fight until everyone is injured. They have a demo called Articles of Defilement that showcases its easily recognizable total death heaviness.
According to José (guitar/backing vocals), they are not nearly satisfied. This demo is just the beginning and they are already on the path to a debut album. And judging by the demo’s “brutal death metal” harsh guitar fight, the Houston metal moshing crowd will be going straight to the emergency room in a stretcher.
www.myspace.com/venomoussupremacy1

--
Hi! When and where was Articles of Defilement recorded and is it available? Will you have your debut out this year?
What’s going man, I'm José Vidal (lead guitar/backing vocals); the demo was recorded in Katy, Tx with Alen (Lano Productions). He has recorded my bass player Nick’s other band Vacillation (melodic death metal), and I thought his work with them was pretty professional and tight so I went to him. Yes, we are currently writing new material, four new tracks are in the already in the oven. The album will be recorded when all material is finalized, which Duane Timlin (ex-Dying Fetus, ex-Divine Empire) will be apart of.

Y’all emerged at 2009’s end and in 2010 have been active (shows, recording, more songs on myspace, etc). What’s driving all this activity?
It’s all about extreme metal, that’s what we enjoy and that’s what you’re going to receive from us. Nick also plays bass for local Houston, Tx band Vacillation, although they haven't been active as of late. Besides that, we were in a modern death metal project named "Engraved," but it didn't work out the end due to uncommitted members so I started Venomous Supremacy. We finally have a steady line-up of focused musicians, so we are able to put our music out and do this to the fullest extent and put our staple in the Texas local scene and beyond: getting more extreme in all of our regions.

What do you have in mind with the lyrics of “Removal of the Flesh”? And where did you get the lyrical ideas?
"Removal of the Flesh" is am abominable, forceful, and ominous lyrical themed song. I created all the lyrics for the songs on our demo; I tend to write a lot, I approach sort of a poetic method and put all the lyrical themes together in sync with the music. I recorded all guitar tracks on the recordings: leads, rhythms, solos, etc.

At 2:55 of “Transcending Divinity,” from 2:55 to 5:18, you do slow-heavy sounds, where Matt (vocals) sounds in pain. Do these slower parts, become the clarion call for moshers?
Actually, those vocal parts you’re talking about was done by me. It’s the black metal influenced part, me and Nick both rejoice in these type of style of playing and feeling. We are not afraid to play slow or anything like that. We try to give the listener something different, something with power. That’s a great thing about it: interbreeding heavy brutal death metal with black metal and our organic, calculated, musical nightmares! As far as moshing goes, they can do whatever they want at any part of the song as long as it goes down.

What kind of support are you getting from your parents?
I'm getting great support from my mother, we have a close relationship. She'll support as long as I'm working hard on the subject. The other guys have a good mutual understanding with their people, but there not always fond of the live appearances ha ha!!

Who wrote the lyrics to “Prophetic Inversion”? Is it Matt and/or José? What type of collaboration do you currently have?
Yea, I came up with all the lyrics with Matt and reviewed them with him. Next, we arrange the vocal parts together into the song. Nick and I usually compose all the music together before anything else. He picks up extremely fast, we both have a lot of ideas menacing our minds. We try to play as parallel as possible, being that’s it, only us two playing guitar.

Have you decided if you want two guitar players live?
We have been searching for a rhythm guitarist since the beginning, but no one has yet to put enough time to move forward with us. So, if it remains like that, we'll just stick to this current set-up.

Artistic creation’s no easy task, moving beyond imitation/tribute or beyond profanity and shock value. As you fight your way forward, what are you aiming for?
What we are aiming for is to be recognized by the scene and for them to know we are here, and here to stay. We are a young band, but full of fresh conception with influence from all types of extreme metal. Musically, the style of playing is only going to get darker, faster, and reaching new levels of complexity to our theory. The lyrics are focused on dark revelations, will power, abhorrence, strong and obscure anti religious views. We are focused individuals looking to infect the scene.

What else should we know?!
The full length album "The Divine Principle Of Ruin" tentative release date is scheduled for fall, but might be pushed further till early 2011 depending on how quickly all the new material is mastered. Duane Timlin drummer will be handling session drums for the album. A new song should be posted by the end of May, a preview of what’s to come. Support The abomination that is Venomous Supremacy. THE END.
Posted by Metal Bulletin Zine at 1:49 PM