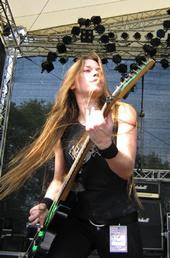 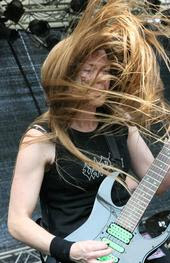 Susan Gerl (Holland)
Death metal guitarist Susan Gerl has executed axes for squads God Dethroned, Murder Syndicate, Cliteater, Desensitised and Catafalque. Considering that, recently this zine caught up with her, and as it turns out, there is a new flame on the horizon. In the meantime, here’s death metal to investigate!
Also, here is a list of the albums in which she has participated.

----
Band history
1994 – 2001 Catafalque
2001 – 2008 Desensitised
2007- 2008 Cliteater
2008 – 2010 God Dethroned
2008 – present Murder Syndicate
Discography:
Catafalque - Your final ride (demo 1995)
Desensitised - Thriving on carnage (MCD 2001)
Desensitised - Bought Beauty (split CD 2003)
Desensitised - Virus of violence (CD 2006)
Cliteater - Scream bloody clit (CD 2008)
Murder Syndicate - Rage and Retribution (unreleased yet)
--
Hello, how are you? What are the plans for Murder Syndicate’s Rage and Retribution? Do you play only death?
Hi, Mauricio. Life over here is good and calm at the moment. The band I’m playing in at the moment is called Murder Syndicate. Wilbert (former singer of Desensitised) and I formed Murder Syndicate in March 2008 and recorded our debut CD Rage and Retribution in September of that same year.
However, when we recorded the CD we knew that our drummer Herman wouldn’t stay, so after the recordings our line-up wasn’t complete anymore which consequently put the whole band on hold.
In December 2008 I joined God Dethroned and my fellow Murder Syndicate bandmates understood perfectly well that that band was to be my priority. So in 2009 I focused full-time on God Dethroned, but when that came to an involuntary end early 2010 I recently met up with the Murder Syndicate guys again and we came to the conclusion that simply none of us were motivated enough to continue this band, because we had all done different things in the meantime. However, we are all 100% positive about the CD we recorded that we are promoting it again now and try to have it released soon, which is not an easy thing to do, especially these days, but we’re looking into more different possibilities at the moment.
I personally can’t imagine my life without (making) music so I started a new project a week ago J. I can’t really say that much about it yet, since it’s simply too early for that right now. At home I don‘t only play or listen to death metal. I also love Satriani’s music for example and practise music like that or try to play a bit of acoustic guitar (which I’m still rubbish at, ha ha!)

When did you begin playing guitar? How did that happen?
I started playing the guitar in ’93. My main reason for wanting to play the guitar was that I loved metal so much and wanted to be able to do the same as I saw all these other guitarists doing. Especially Carcass and Bill Steer have always been a huge influence to me. At school there was this group of metalheads I became friends with and of course me and my sister always went to gigs together (still do). One morning she told me that she had discovered a metal radio show the night before and I should have a listen. I did and was hooked to metal ever since.

Do you also do vocals, play bass and/or drums?
That’s a nice question, because I don’t think that many people know that I also used to do vocals when we just started our first bands. I did additional vocals and guitars in Catafalque and Desensitised. In Catafalque together with our bassist and in Desensitised together with our singer. I also play a little bit of bass guitar every now and then, but definitely prefer playing the guitar. And of course, I always try to become a better guitarist.

What guitar equipment do you use?
I have used pretty much the same equipment for the last decade: Boss pedals (Metalzone, Delay, Noise surpressor, tuner), a Bad Horsie wah pedal and my modified Marshall head and ENGL cab. I have 7 guitars: three 7-strings, three 6-strings and one acoustic.

Are you currently working at a day job? What do you do?
Yep, I am. I teach English at a secondary school for higher education.

What type of lyrics do you like? Cliteater had typical gore, horror/shock value lyrics. What are your own ideas?
I have written most of the lyrics for both Desensitised and Murder Syndicate. I usually write about everyday life situations, things I see around me or things that bother me.
Ha ha, the Cliteater lyrics are all meant tongue in cheek and therefore should not be taken too seriously. The line–up the band had when I played with them was really cool. These guys were very nice and kind and not sexist at all. This whole porn concept just fits the band well and is obviously liked by a certain group of people, but shouldn’t be taken too seriously.

What else do you have going on in 2010 and 2011?
I have a number of things in the works, but can’t really say much about them yet since these are all brand new ideas, but this year will be a year of redirecting my goals which will hopefully be realised in 2011J. THE END.
Posted by Metal Bulletin Zine at 1:18 PM