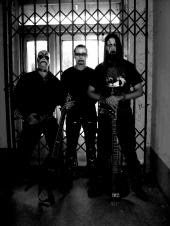 Botritis Cinerea (Germany): The Burning Slave Mark
The black metal hunger of Botritis Cinerea is compact and to the point: six songs of traditional/raw black metal, each song lasting approximately 2:30 to 3:30. Botritis Cinerea is about a vibe: their desire is to keep it elemental. The sound is transylvanian: the musical values of a purposely fugly, primal feel. (In addition, the seventh track is 2:29 of solemn instrumental piano, in contrast to the other six songs. Is it a hint of future things?) Anyway, their songs stay at the shorter end of the spectrum and their impact is felt immediately. Their idea is not that you should wait around for the “good” part of a song, since the good part is the song itself. Then it’s time to move on to the next one.
Now, Botritis Cinerea is no fancy proposition and they are in the area of “for total-black-metal-maniacs.” The band likes black metal oriented towards the old school, so while they might be one-dimensional to some, to others this will be exactly what they like, as if the band has been asking: “Whatever happened to just plugging in your guitars and going crazy on basic black metal?” Accordingly, it is revenge, grief, dogma, obscurantism, etc., that are the topics of the lyrics.
“Multiple Personality” lasts 2:31and the vocals are complete throat-destruction and pain-amplification in the shrieked style. The guitar riffs on a black/thrash tone and rides it out until the wheels come off. The drumming doesn’t exactly always sound like blasting, but it’s pretty much in that speed, chaotic, etc.
“Bitter Song” (3:05) is a barrage of noise pounding away, screaming bloody murder to the breaking point of the vocalist’s throat and the guitar player’s tired wrists. The drums sound like they will fall apart any second now from the beating they are taking.
If someone told the band that “My Own Hell” (3:00) sounds pretty much like all their other songs, they would probably say, “Thank you very much, you are so kind.” Or invite that person to fly a kite. Their recording is a good demo and it allows the band to bring their songs to life and for metallers to check it out, particularly the black metal devotees.
www.myspace.com/botritiscinerea
Posted by Metal Bulletin Zine at 9:56 PM