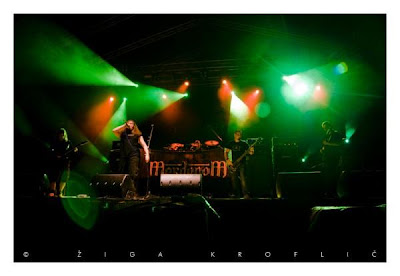 Mordenom (Slovenia)
Mordenom achieves a very professional sound on their debut AGNVS DEI: uptempo/midtempo/blasting death/black with emphasis on guitar melody/riffs/solos and atmosphere, and some melody. This is a self-release, but it sounds professional, definitely not a like rough demo. Having spent all that money on the recording, you would think that they are now totally broke and living in a van down by the river.
You only live once and you might as well go for it and make the album you wanted to make, consequences be ignored. Mordenom, you have made the cd you did want to make and your hard work has been worth it.
If you want a little melody and atmosphere, with your metal, and good production, begin here. Mordenom will not disappoint.
Air guitar time! Marjan (lead and rhythm guitars) will be the guide. If you like what you hear, be supportive!
www.myspace.com/mordenom
--
Hello! AGNVS DEI has such good, memorable songs and good sound quality. What have you done to support the release?
Hi, Mauricio. First, thanks for the kind words. Yeah, we are definitely satisfied and proud with ourselves and the record we’ve made. I think it was two weeks after the album was finished when a release party was organized. Then we did a mini tour around Slovenia - few concerts to support the album. We've also played one open-air summer festival, MetalCamp. We’ve sold few copies of our CD, I don't know the exact figure, but I can tell you, it isn't a big number. Slowly we’re getting there, but we are realistic. For this kind of music and in the situation we're in there really isn't much more we can do. Our primary goal is to make music that sounds good to our ears and enjoy the whole process of being in a band.
Currently we are working on a video for a song from Agnvs Dei - Conjecture about Reality. That's our next "big" project. We are also working on brand new material, so we keep our selves busy. For merchandise please check out our website (www.mordenom.com) where you can order our debut album and various t-shirts.

Your album is a self-release. Impressive! Have you recovered some money? Are you optimistic about the band’s future?
We’ve managed to recover about 1/5 of the money we’ve spent for the album. But that really isn't an issue or a problem. We knew that long before we entered the studio. Or in other words: we are not in it for the money. I mean, don't get me wrong, we would all like to do this for a living but unfortunately it's just not possible (yet?). Nevertheless, I think you could say we are optimistic. I am constantly writing and working on new material, we have three interesting songs already written and a lot of good stuff is still waiting, so to speak, to come alive. As soon as we got enough material we'll demo it and head to the studio. So, second album is in being written as we speak and probably will be properly recorded in the near future.

“Towards the Iron Gates of Aeon” lasts 11 minutes. What was it about the original idea that made it 11 minutes? Would you like that song to be played at your funeral?
We are proud of all the songs on the record, every second of every song is there with purpose. That being said, Towards the “Iron Gates of Aeon” is definitely a special song. I’ve noticed it’s seen by many as the culmination of Agnvs Dei. It's the longest one and it sort of concludes the concept of the record. I knew from the first riff it would become this long, epic song and the one, which will end the record (at least in some way). Even the working title was "Ep" (translation: epic). When a song is that long you have more freedom to experiment with different themes and it wouldn't be logical to have eleven minutes of blast beats, tremolo picking, and growls. So, from the start we knew we wanted a diverse, dynamic song, with lots of drama and I think we got one.
Funeral? Well, I think in certain way the lyrics would fit pretty well, but musicaly speaking I would rather hear something mellower. Let's say Death’s Voice of the Soul would be nice :-)

You played the Metal Camp Festival. What did you like about it? I hope that some people wanted copies of your cd!
It was great. The time was good, the weather was good (in the time of our concert, otherwise it was terrible – raining all the time). That was our first open-air festival; big stage, there was a lot of people, etc. MetalCamp is really a beautiful festival and if you're a metal fan it's just cool to be there and experience it. It was actually our goal to play there since we were all fans of the festival, so when they selected us among circa 400 bands we were hyped. During the concert we had some minor techical difficulties but that didn't ruin the overall impression.

“Blessing or the Curse” makes an impact right from the beginning: Good job! This song was written by Marjan. Was it arranged by everyone? Is Marjan the one who started the band?
Yes, I wrote the song and the lyrics while Jernej, Rok and myself did other arrangements. The three of us were also founders and first three members of Mordenom. We actually don't write songs or even riffs on rehearsals, which I guess is a little unusual. We practically use them (only) for practising and "strategy". Sometimes we have little jams, and when we do them, we usually switch instruments and just play for fun. Not that it matters – “Blessing or the Curse” is the fastest (tempo-wise, 250 BPM) and clocking at 4:30 shortest (vocal) song on the record. But basically it's a pretty brutal "in your face" piece and a fun song to play live.

Are there metal bands in Slovenia that have women members? How is the metal scene growing in Slovenia?!
There is one all-women heavy metal band, I think Hellcats is their name, but I really don’t know anything about them or any other all-women band, sorry. The metal scene in Slovenia is getting stronger every day. We have good bands in all genres and some of those guys really should get more recognition for their work. Check out some of them (Noctiferia, Burning Legion, Negligence, Obduction, Neurotech, just to name a few) because they deserve it and you won't regret it. Though, I must “warn” you, for some (unknown) reason there are a lot thrash and black metal bands in our country.

“Above the Mysterious Worlds” (8:10) has a longer guitar solo/melody from 3:40 to 4:23. Do you remember when you constructed that particular part of the song?
Of course, I remember. First part of the melody was written at the same time as the riff. I knew we needed a change in rhythm and atmosphere, a break if you want, and that arrangement was perfect for it. The 2nd part was actually improvised in the studio. I was just playing around with a melody I had and when the right one came we just pressed the record button and record it (along with it's harmony). As for solos goes, I see them as a little "song in a song". Before I begin writing one, I always have a general idea of how it should sound, where it should go. Usually I hear certain melodies in my head before I actually start to play. Then on some parts I just improvise and get some quality passages from that. This normally gives me about 90% of ideas, the other 10 are always in the air :-)

Are you college students? How expensive is the university? In the U.S. it’s expensive: more and more only for the kids of the rich and middle classes, but not for the working class?
We all have jobs, except our vocalist, he still goes to college. He studies at Faculty of Electrical Engineering. Yes, we know all about your education system. Things are a little different here. The education (tuition) isn't that expensive, but the cost of living is high, scholarships are low and very few get them. Meanwhile, a good education doesn’t necessary mean a good job. It's probably more important to be in the right place at the right time, gain as much experience as possible or to have some kind of connections, but I don’t know, man. You probably know how things currently stand as the global economy continues to weaken. I must also point out that we all come from a middle class working families, so it's been/is pretty hard for us to finance ourselves because we rarely get money from our music and we basically do it for the pure love and passion for the music.

You use a lot solos. Do you think that your music would lack the dimension of melody and memorability without solos? Does Rok Stopar play any solos or are all done by Marjan?
Yeah, I think our music would lack if solos weren't there. We are a guitar/riff-oriented band. Our songs simply call for good lead parts. Basically it all depends on what kind of music you listen or play. For example, if I listen a band like Gojira, I don't miss them. On the other hand, when I'm listening Nevermore or let’s say Necrophagist, I would miss them. I grew up on rock and metal bands that have solos in their songs and when I discovered instrumental (guitar) music and all those crazy jazz-fusion players I fell in love in it, so they were always part of my playing.
I think they definitely add something to the song, but a song should never depend merely on solos. I take them like some "cherry on top" kind of thing. Good, strong, interesting riffs are music bones and therefore rhythm is way more important than any solo, so we are very careful that a song (or talking about solos) has a good progression of riffs and rhythm.
I wrote and played all solos on Agnvs Dei.

You live in Slovenia. Unlike the U.S., it’s not far to go to other countries. So, do you go to metal shows in other countries?
We are surrounded by 4 countries; Italy, Austria, Hungary and Croatia. And since we're in the EU it's pretty easy to travel to other countries as well. We also have a lot of concerts in Slovenia (approximately one every day) so there really is no need to travel far away. And with festivals like MetalCamp and Paranoid Open Air you’re able to see a lot of different bands in just few days (although we all know the difference between festivals and headlining shows). Personally, I'm very picky with the bands I listen and concerts I see. So, in 2009 the one that stuck with me would probably be Opeth on Progressive Nation Tour. I prefer quality over quantity, so if I see one good concert once a year, it’s been a good year." THE END.
Posted by Metal Bulletin Zine at 2:22 PM