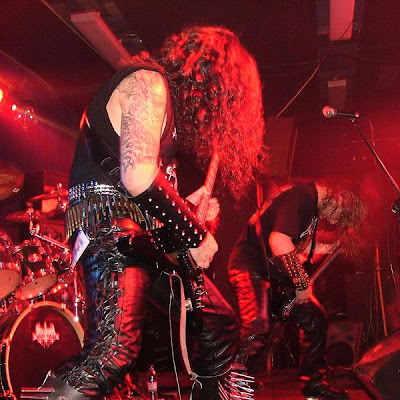 Azarath (Poland)
The drummer Inferno, who handles bashing duties for Behemoth (Poland), also has the jam-packed death metal allegiance Azarath whose most recent album “Praise the Beast” exercises the art of obscurantist, blasting, marching-riff death. These artisans procure an action-dynamic, claustrophobic-sinister, thick-riff music whose workings, like those of dissonant-aggressors/contradictory-harmonics death metal sensei Immolation, are very obvious and upfront, but whose structures do invite repeated listens to better understand. Azarath’s music points in that direction, and confidently on this album, their fourth one, according to guitarist Bart, who is the human being answering these questions.
“Praise the Beast” is high-caliber music of guitar solos, licks and cool riffs appearing from every which way, massively heavy death metal downtuned riffs, blasting, low-guttural aggressive growling. The cd is very professional, with a solid sound quality (to these ears, anyway), and well-arranged songs. This is not gore-burp-and-pig-squeal cupped-microphone breakdown-chugga-chugga, but rather guitar-oriented fast and heavy, blast-and-shred death. Impressive!!.
www.myspace.com/azarath666
--
Hello, how’s Azarath’s world in Poland for the moment? “Praise the Beast” is such a good album!
BART - Hello. Thanks for good words about our last album! Everything is going well. We just have new member - Necrosodom (from Anima Damnata) who replaced Bruno as vocal/bass player. We cannot continue with Bruno further, he had to focus on his private life and he was not engaged in the band matters.

How many albums do you have in total?! And how can people get them, from you, from the internet?
We have four albums so far, you can check them all on our website or myspace and listen to few songs available online. You can buy those albums through some labels/ distributions. Please contact US DEATHGSAM or Agonia records, or Pagan Records. Yes, they are also available from the internet.

Do your songs, like “Throne of Skulls,” cause controversy and problems for you with the government in Poland? Have you had some problems like Behemoth?
I haven't heard about any problems considering that song. But we had some problems for live shows. Once, few years ago we cannot play in Opole city during the tour with Vader in Poland. We and Vesania were banned for this show for as they said "satanic reasons'. This autumn, during the tour with Behemoth in Poland, we had some problems together with Behemoth. Some people, including the man who bring Nergal to the court earlier, tried to cancel some shows. But fortunately they failed. The tour went fuckin great with all shows!

How many guitars are you playing in your songs in the studio? Is it really just two guitars or 3 to 5 guitars?!
We really put just two guitars tracks. Only in some moments, special parts we put 3-4 guitars, but it is not rhythm guitar parts, I mean something special, melody, higher parts and something like that. For the last album "Praise the Beast' we recorded one guitar using Laboga amp and second using Peavey 5150 amp, both amps with Laboga cabinet.

Was your song “Obey the Flesh” written together by Bart and Inferno? Does Inferno play drums, but he also knows how to play guitar? Bart and Inferno write ALL songs?! What about lyrics?
Yes, Inferno composes songs and riffs on guitar, that's true. We work both for all guitar parts for the whole album. So there you can have songs composed by both of us, some strictly by Inferno (like "Queen of the Sabbath" for example) and some by myself. Lyrics for the last album wrote Baal (from Hell-Born band)

How many concerts have you played in Europe this year? Have you received interest from other places, like Brazil or Japan??
We haven't played any European tour. We've just played some festivals this year, like Inferno Fest in Olso, Party San in Germany, Devilstone in Lithuania. But the main area for shows was Poland, we played some single shows and tour with Behemoth in September/October 2009. We got many e-mails, messages for playing Brazil and South America, for North America. But not real offers to come there.

Your instrumental song “From Beyond the Coldest Star” is surprisingly catchy and melodic! Did you plan it this way?
It was planned, not done in the studio. I compose this song as one of the latest ('Azazel' was the last) for the album. I knew that it should be outro track. And I wondered if it should be instrumental or with some speech maybe. I played those riffs to Inferno and he said, "let's do it instrumental, I will do simple drums for that, it will be great". So we did it.

When will you play and tour in the U.S.?! You should tour with Immolation! Both make fantastic music!!
Yes, we truly would like to come to US and support Immolation. Our live drummer - Adam Sierzega - talked to them when he was their drum technician for their last European tour and they said it would be great idea. But we have to get real offer from US and some support to cover flight tickets.
Thanks for the interview! www.myspace.com/azarath666
www.azarath.tcz.pl THE END.
Posted by Metal Bulletin Zine at 8:35 AM